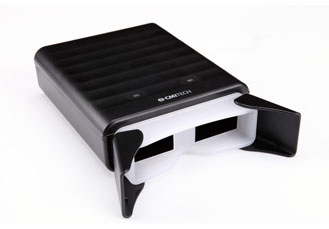 The BMT-20 is a binoculars-type, simultaneous dual iris capture system intended for enrollment applications, especially very large scale programs, in which subjects are presumed to have no prior experience in providing iris biometrics samples. Developed for and proven in the highly demanding India UID program, the BMT-20 offers the fastest capture speeds, superior usability, minimal failure-to-captures rates and outstanding image quality.

Most importantly, the instructions are easy to communicate, resulting in a simple experience for operator and subject alike. The user is simply directed to raise the BMT-20 to his or her eyes as if they were binoculars, touching the forehead bar to the subject just above the eye brows. Once the device is in position, they are asked to center their eyes in the internal mirror while keeping them wide open their eyes. The system does all the work of finding the irises and capturing pristine iris biometrics samples. The BMT-20 is extremely efficient: once the subject’s eyes are centered, the iris images are captured in 1.0 second or less.

The BMT-20 features the largest depth of capture of any binoculars type camera on the market. This capture range, a full 30 mm, covers the range in the position of the iris relative to the forehead of the entire population of adults and children down to 5 years old. This means that all irises are within the focus capture zone when the BMT-20 is touching the forehead. By eliminating the need to reposition the eyes during exposure, the system is consistently fast and highly robust for large scale programs. It also offers the largest interpupillary distance range of any device on the market of 40 to 90 mm, enabling image capture on children, again as young as 5 years of age.

The BMT-20 meets the stringent requirements for IP64, which means the device is highly resistant to contamination from the smallest of airborne particles such as dust and dirt. The system also includes an internal white LED that serves to constrict subject’s pupil diameters to a consistent level, thereby improving the quality of the enrollment image even in low light ambient environments.